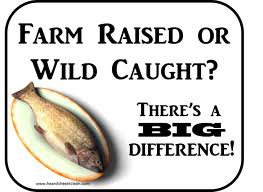 Perhaps you’ve heard the dietary health advice
“Eat less red meat and more fish”.
In a perfect world this is good advice, but in the real world there is a very important factor that is often ignored.  You should take the same approach to the food you eat as you do to the advice you’re given…

The source of the fish you eat may not be something you’ve ever though twice about.  But you should.

It might surprise you to know that there are many breeds of fish with higher levels of toxins than red meat.

That’s right.  Some commercial fish is actually worse for you than commercial beef.
Once upon a time the fish we ate came from lakes, streams, and the ocean. Now the majority of fish in restaurants and grocery stores comes from fish farms.  We’ve all heard of “farm-raised fish” and it’s even promoted like it’s a good thing.  But when you take a closer look, farm-raised fish makes about as much sense as ocean-caught beef.
The most common fish species raised by fish farms are salmon, carp, tilapia, sea bass, catfish, and cod.
The fish are tightly packed in tanks or cages with thousands of other fish eating fish food or fish meal.  These close-quarter living conditions breed disease and parasites like sea lice, which requires the fish and their environment to be treated with antibiotics and fungicides.
Gross-out alert:  Salmon cage farms drop as much sewage into the sea as a city of 1,000 people. With as much as 50,000 fish in a two acre space, that’s a lot of fish poop!

Clearly this is not their natural habitat.

All farm-raised fish is basically unhealthy, but in the interest of brevity, let’s just look at the salmon industry.
In the wild, Salmon feed on smaller fish and krill, a little red shrimpy creature that actually turns their meat “salmon color”.

Salmon don’t eat krill at fish farms, they are fed “fish meal”, made up of ground fish parts, and as a result, farm-raised salmon meat is gray and has to be dyed to look like normal salmon does.
Think I’m making this up?
The SalmoFan is a color chart fish farmers use to pick various shades of salmon-colored fish dyes.  And if you read the fine print on farm-raised salmon packaging you will see the words “color added”.

Farm-raised fish is not clean meat.

If all that isn’t enough to convince you, the taste difference between farm-raised and wild-caught salmon will certainly do it. I’ve cooked them side by side on a grill and let me put it this way:  One tastes awesome, the other has no taste. This is why restaurants usually serve farm-raised salmon with a heavy cream sauce.  You’ll be surprised to find that wild caught salmon doesn’t need a fancy sauce.  Grill it, bake it, or pan fry it in coconut oil  and it is absolutely melt in your mouth delicious.

The down side of wild

Unfortunately in today’s world, wild-caught doesn’t always mean it’s good.  Let’s face it, there’s a lot of polluted bodies of water now. I wouldn’t touch anything from the Gulf of Mexico. And thanks to decades of pollution, many breeds of wild fish now contain high levels of mercury and other toxins.
In 2006 Consumer Reports busted companies selling farm raised fish as “wild-caught”.  Again, know your source.
Wild-caught Alaskan salmon is one of the cleanest healthiest fish on the planet, which is why it’s my fish of choice.
For complete list of healthy and unhealthy fish based on mercury exposure go HERE.

Don’t be fooled by menu descriptions.  ”North Atlantic Salmon” and “Chilean Sea Bass” are just breeds.
This does not mean they were caught wild in the North Atlantic or Chile.
When I eat out at a nice restaurant I make it a habit of asking if any of the fish on the menu is wild-caught, and where it’s from.  Most of the time the server doesn’t know and has to go ask the chef.   I realize this makes me look super snobby to anyone within earshot, so I try to be discrete.  What can I say, I’ve got standards.
My favorite excuse, inspired by my friend Ken Steorts is,
“I can’t help it, I know things.”