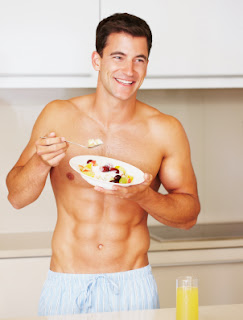 So I understand women eating foods like pizza, burgers, wings, tacos can be a pretty detrimental thing. But I always figured guys can handle a few extra pounds. Well according to some recent studies men should be watching what they eat just like us. Especially if they are looking to procreate normally and healthily! - From Infinity Health and Wellness Blogger, Shantee Tyler.

Dude foods like burgers, beer, pizza, bacon and chips may be the all-time guy faves, but it’s these very foods and beverages that may be stealing men’s manliness.
Several studies have found that men’s sperm quality and overall reproductive health is less resilient than previously thought. Even though men can produce around 200 million sperm a day, the quality of those sperm is on the decline and the likelihood that he’s shooting blanks is a real probability.
One recent study reported in the journal Natureconcluded that older dads have more random gene mutations in their sperm and that the father’s age accounts for some 97% of the new mutations found in children’s genes. And these mutations may be linked to autism and other brain disorders. And there’s more trouble: Danish researchers have tracked the health and sperm counts of 18-year-olds and found that nearly 45% of the young males had sub-optimal sperm counts.
A growing number of American men are what docs call sub-fertile, meaning they have low sperm counts, slow-swimmers or a higher percentage of DNA-damaged sperm. It’s estimated that 40 to 50% of infertility is linked to fathers-to be and now, one in every five couples has some degree of infertility. As a result, reproductive endocrinologists and urology specialists are focusing on what wannabe dads can do to improve the odds of achieving a healthy pregnancy.

Where Have All the Good Sperm Gone?

A typical American diet (high in sugar, fat and calories) is considered one of the main culprits for the dwindling numbers and quality of men’s sperm. A high-calorie diet rich in saturated fat and added sugars wreaks havoc on sex hormones. In addition, exposure to chemicals like certain pesticides and by-products from plastics act as estrogenlike compounds that adversely impact sperm health.

Many factors are contributing to the decline of men’s reproductive health but diet and exercise is one place to start now to help boost his mojo and help his swimmers’ make it to the finish line.

This article gives the light in which we can watch the truth. This is exceptionally decent one and gives indepth data. A debt of gratitude is in order for this decent article. jenny bolton

We have to recognize genuine medical problems from corrective needs and suspicions. Very frequently when you hear Mens or Womans wellbeing it tends to lean towards excellence subjects versus health as we are pushing here. www.testogen-reviews.net