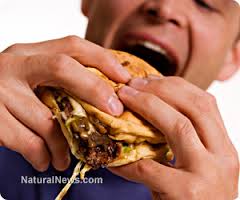 \
"I always wondered why after a meal at Taco Bell, or a bag of chips and a soda, I was never really in the best of moods!! Then I stumbled upon this article! Must Read!" - From Infinity Health and Wellness Blogger, Shantee Tyler

(NaturalNews) The things you eat have a direct effect on your state of mind, and even have the power to drastically alter your behavioral patterns. These are the findings of a new study out of Oxford University in the U.K., which revealed that processed junk food consumption can lead to aggression, irritability, and even violent tendencies.

According to Dr. Drew Ramsey, who led the study, nutrient deficiency is a major cause of behavioral abnormalities. Without the proper nutrients, he says, the body cannot produce the appropriate chemicals and hormones required for clear thinking and healthy mood, which in turn can lead to irrational and even dangerous behaviors.

Upon analysis, it was determined that those inmates who took the vitamin supplements were far less aggressive and angry than those eating primarily processed junk food. According to Dr. Ramsey, the findings indicate that nutrient deficiency, which is becoming increasingly common in the modern world, is directly correlated with erratic and violent behavior.

"Deficiencies in nutrients, magnesium or manganese, vitamin C, or some B vitamins may make a person hyperactive towards a stressor, a short fuse so to speak," says Nicolette Pace, a nutritionist, concerning excess consumption of empty carbohydrate junk food. "[Carbohydrates] don't give your body what you need to cope with day-to-day stresses."

Several locals interviewed as part of a CBS Boston report on the study agree, having told the news station that specific foods identifiably alter their moods and thoughts. One woman explained that her diet noticeably affects her moods, with junk foods bringing out the worst in her thoughts and perceptions of the world around her.

A similar study recently put out by researchers at Penn State came to similar conclusions, having found that individuals already prone to moodiness are even more likely to be in a bad state of mind if they eat junk food. According to that study, negative moods are amplified considerably following junk food consumption.

"Cutting back on high-sugar foods such as chocolate, sweets and sugary drinks can help prevent the mood swings," says Amanda Ursell, a nutritionist, as quoted by The Sun back in 2009. "Replace them with foods that have a low glycemic index (GI). These foods are digested slowly, preventing big changes in blood sugar levels that accompany high-sugar food."